So on Saturday was another virtual running race again. I decided to do the 10K distance as always. Since the people at marathon100.com had now done a test to compare different running apps and heart rate monitors, they said that everyone using RunKeeper have to run 10,4K since RunKeeper is the most inaccurate app. Bummer! 😦

I was pretty sure that I was going to be the last one to finish this time because 1) there were only 10 people in the original starting protocol; 2) I had had 5 intense workouts in a row before the race (stupid!!!). Friday was supposed to be an easier workout day but unfortunately I screwed that one up with cycling in strong wind. 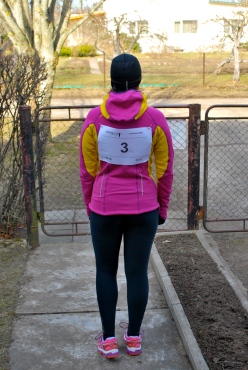 I woke up around 8 AM and quickly made some oatmeal porridge to fuel myself. I added milk, water, oats, bran, flaxseed meal, raisins and strawberry preserves. But since it was so early in the morning, I ate it before I took a picture…

I hit the road for a 600 metre warm-up around just before 10 AM. The weather was a little chilly and windy but sunny and beautiful. I was kind of worried that maybe the food will be sitting in my stomach and give me discomfort but actually porridge before my run was absolutely perfect. I felt great!

After my warm-up I set my RunKeeper up for the race. The first kilometres were kind of boring and pretty difficult: my legs were a little tired and heavy. But man I fast! First kilometre was 5:55 per km –> it sure didn’t feel like it.

By the 4th kilometre I reached Jõhvi. Running in the city is always more exciting. I always get funny looks from people since we don’t have that much runners here. I got stuck behind a red traffic light twice, that kind of messed up my “flow” but never EVER run on the road with a red light. It’s dangerous.

My legs never actually got this amazing “I’m flying” lightness this time, the lack of rest obviously had a major role. I kept pushing myself and I was pretty fast, going around 6 min per kilometre. Usually 7 minutes per km is an acceptable pace for me. Carbs are rocket fuel! 🙂 I like using rocket fuel.

Anyway, when I reached Jõhvi Concert House and the city park I was starting my 6th km and it was time to head back home. Later I heard my dad saw me from his car and even honked the horn for me but I had headphones in and didn’t hear anything. The new promenade is a good running track, I’ll be using it more often from now on. I also got pretty hot and sweaty and regretted adding another layer of clothes the last second before leaving the house.

When I reached the city border, I had around 3 more kilometres home. The wind between the fields was pretty strong but I kept telling myself that I can do it. I wondered if I could do the race under an hour but then figured out I would have to speed up a lot and decided to leave that goal for another time.

Somewhere before the 9th kilometre mark I got kind of emotional thinking about my running journey and where my pace has come since last summer. I was running around 8 min per km then, now I was going around 6 min per km. That is such good progress!

Before even noticing, it was time to speed up for the last kilometre and give it my all. I have to admit, it was damn annoying to run another 400 metres when 10K was actually done. I finished a couple hundred metres before my house. All in total I ran a little over 11K that day.

When I got home, I refueled with a nice smoothie and then foam rolled every single muscle in my body (well, most of the muscles used for running). I was really really happy with myself. What a great Saturday!

I’m so excited for Parkmetsa 7K race on Saturday! Bring it on 🙂