In this blog post series I will have six posts telling you all about my adventures in Thailand. The posts will be published every other Monday starting today.

Everything started on the 12th of January 2014. In the morning I made my last workout: a quick run and then it was time to head to the bus station to start a rather long journey to Thailand.

Me and my mom left for Tallinn on the 1.45 PM bus from Jõhvi. The bus ride was beautiful: it had just snowed and the forrests were just like a winter wonderland. By 4.30 we were already in the Tallinn port and boarded M/S Baltic Queen to go to Stockholm. It was a fun night: we looked around, played some bingo, shopped and then called it an early night. I slept horrible: I couldn’t fall asleep and ended up getting only a couple of hours of normal sleep.

10 AM the next day we arrived in Stockholm. We took the subway to the city centre and then went straight to our hostel (Best Hostel City) I had booked before. Well, actually not that straight: we got a tiny bit lost but that was OK. We dropped off our bags and then headed to Gustav Adolfs Torg to catch our city tour bus. 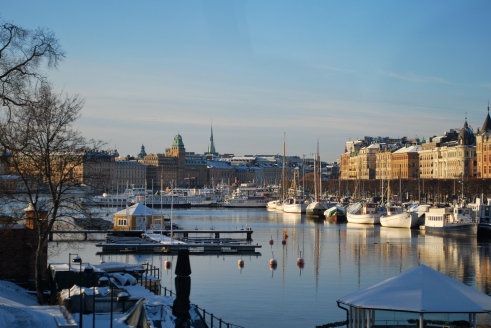 I have actually been to Stockholm 3 times before but never taken a good tour around the city. It was time to correct that mistake! Since it was pretty cold outside, around –10C, the bus tour was perfect. After touring the city we walked around the centre a little bit, shopped for some food and then headed back to the hostel. Also met an Estonian there 🙂 Then it was time to go to bed since I was really tired and needed some sleep before the next day.

The 14th of January 2014: time to fly! We had alarms set up for 7 AM and then had some hotel breakfast. Not LCHF anymore: I had some cornflakes, toast and jam… Oh well, I knew my low carbing was not going to be practised on that trip. Then we went to Cityterminalen, jumped on a bus and around 10 AM were already at Arlanda Airport.

Then the waiting began. This trip contained a lot of it: at airports, bus stations, ports etc. Around 1 PM our flight left for Dubai. It was a good flight: I watched 2 or 3 movies and also the food was nice. The service on Emirates is wonderful.

We had around 5 hours in Dubai Airport so we did some shopping (really good tax-free shops etc) and then just waited some more. 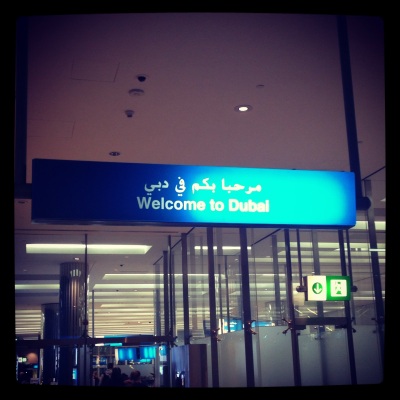 The flight from Dubai to Bangkok was also good. At noon on the 15th of January we reached Thailand! But right away we had more waiting to do: we had to get a Visa On Arrival but got stuck behind a group of Ukrainians. We stood there for around 2,5 hours, usually it should take around half an hour. From the airport we caught a train (45 baht so around 1€) to Phayathai station and then shared a taxi to Khao San Road with 2 random guys. Paid 50 baht for that. I was pretty shocked on the train: lots of little houses in bad condition, palm and banana trees. I just kept thinking: how do people live here?

On Khao San we instantly started looking for Lomprayah bureau to get night bus tickets to Koh Tao, our next destination. We looked but couldn’t find it. Then we made a really bad step: let some locals give us directions, actually believing we would get to the right place. We didn’t. We were directed to a local “tourist information center”.

The lady there started talking about it being high season and everything already being booked. She claimed that there were no vacancies on that day’s night bus with Lomprayah and offered us tickets with Songserm, another company, or tickets for the next day. We actually got really nervous because of her and were worried that we wouldn’t make it to Koh Tao on time. We did have a tight schedule since we only had 2 weeks in Thailand. The lady there also tried to sell us hotels and tours because according to her: “Everything is booked. You’ll be crying when you get to Koh Tao and can’t find a place to stay.”

I started to get the feeling the lady wasn’t as nice as she seemed. I had to tell her about 10 times that we weren’t interested in booking any tours or hotels from her and that we are only looking for tickets to Koh Tao. Also, the prices she was talking about were waaaay to high for us. I got really nervous, thinking about different scenarios how we will have to come home early because we have run out of money…

My inner voice told me to leave this office and find another one. But since it was already around 5 PM and we were worried that we wouldn’t find another option we bought the night bus and ferry tickets from her. WORST DECISION EVER. We paid 2500 baht per person. The tickets should have been around 1000 baht. If things seem dodgy, walk away. There will always be other places to get stuff from. But we were backpacking rookies and the locals took advantage of that.  We also met that scheme of “everything is sold and booked and you have to buy it from me” in other places in Thailand, too. But there we were already smart enough not to fall for that.

We had about 15 minutes to find some food since we were starving already. We were far from Khao San and no one spoke English, there were weird Thai foods on a street and lots of food stalls had closed. We were in a bad mood about being ripped off liked that and also nervous. We grabbed some pad thai to go and rushed back to that tourist office.

We were put on a tuk-tuk and then dropped off on Ratchadamnoen Avenue. Then I ofcourse had absolutely no idea where we were. We were told the night bus would pick us up in 20 minutes. There were also two other women waiting there, so at least we weren’t all alone. More people were dropped off there and time kept passing. We waited around 1,5 hours (!) before a rather terrible bus picked us up.

After messing around with the seats, we managed to get them moving a little bit. We got a little bit of sleep and then around midnight it was time for the first and only stop on our way. We got a chance to visit a toilet that was quite the experience and buy some food. Our mood was still down. I just kept thinking what a horrible vacation I’ve given my mom. I might have dropped a tear or two… I was mad and sad at that time. I actually felt like going back to the airport and flying back home. If that was Thailand, I wanted out.

The toilet in the bus didn’t work, neither did the lights. It made aweful noises and we doubted if we would ever make it to Chumpon to our ferry. We then wanted to let our seats back to get some sleep. They didn’t work! We were furious. How are we supposed to sleep on that thing they called a “VIP bus”? 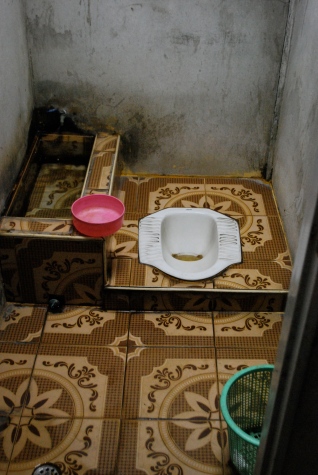 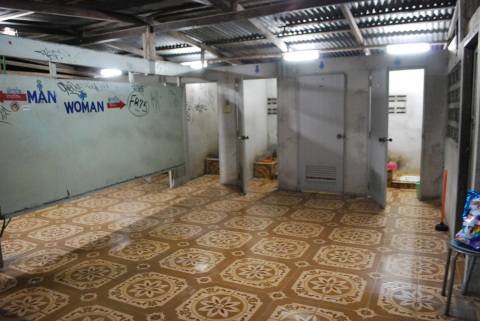 After the stop we actually got some sleep in that horrible bus. We arrived at a place around 5.20 AM the next day. Soon we learned that it wasn’t the port as we hoped. After 2 hours of waiting we were put on a bus again and around 8.30 AM we arrived at the port. But it wasn’t Chumpon!

We were further south near Surat Thani in Don Sak. More sitting around and waiting. I knew that we should arrive on Koh Tao around 9 AM. This didn’t happen. We boarded a ferry around 10.15 AM. We stopped on Koh Samui and then on Koh Phangan. That we figured out by ourselves ofcourse, no one gave us any information.

At 1 PM we switched boats. I managed to get a slight sunburn in less than an hour! Around 3 PM we finally arrived to Koh Tao. 6 HOURS too late…

But I was finally on Koh Tao! And that place was pretty amazing :)We were exhausted. I hadn’t showered in days and felt like a homeless person. I was a total mess. 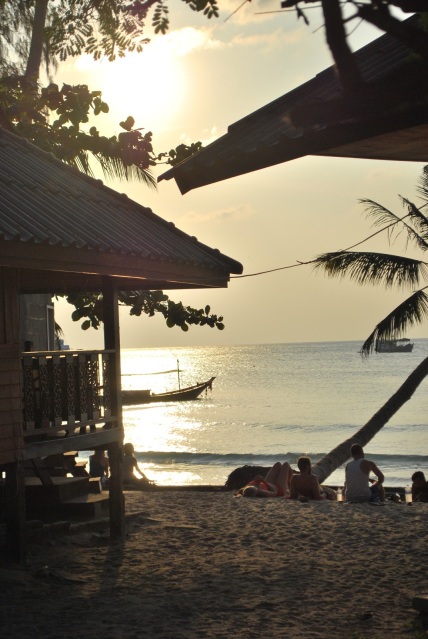 Next post: our activities on the wonderful Koh Tao.

7 kommentaari “Thailand part I: Stockholm and arriving in BKK”